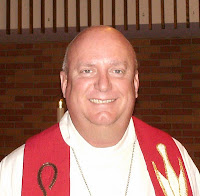 Lent is now only a couple of weeks away, and an exceptionally long Epiphany season is nearing its end.

I'm certain at least some folks knew yesterday (22 FEB) was George Washington's birthday, and more probably knew that Monday was President's Day. But, I would hazard a guess only a few know that today, in the Church, is the feast day of Polycarp of Smyrna. Strange name, incredible history and meaning behind it.

Polycarp was born about 69 A. D. In his early years, he was a disciple of John, the beloved disciple, in Ephesus. Polycarp's deeds in the Church are somewhat shrouded in mystery. Once, upon meeting Marcion, one of the Church's first major heretics, Polycarp is reported to have refused to acknowledge him, and even called Marcion "a child of the devil."

Polycarp was arrested during a persecution in the area of Smyrna in the mid-150's. Being nearly ninety years old, the Roman governor urged the aged bishop to curse Christ, sacrifice to the genius of the emperor, and live. Polycarp's response is the stuff you can't make up: "For eighty-six years I have served Christ, and He has never injured me. Therefore how could I curse and blaspheme my King, who has given me salvation?"

Being steadfast in the faith, Polycarp was handed over to be burned at the stake. It is reported that, as he sat in the flames, he prayed, "O God, the Father of Your Son, Jesus Christ, through whom we have received knowledge of You, the Maker of all creation, I call upon You, I confess You, that You are true God; I glorify You because of the high priest, Your beloved Son, with the Holy Spirit; receive me and make me a sharer in the resurrection of Your saints. Amen."

Tradition says that Polycarp actually survived the flames and was finally put to death by being run through with a sword.

Polycarp remains significant to the Church today. He is the bridge between the apostolic age and the age of the confessors in the second and third centuries. Polycarp's Epistle to the Philippians remains today. Also, The Martyrdom of Polycarp, written by Irenaeus, one of Polycarp's disciples, and Caius, one of Irenaeus' associates, remains to this day an encouragement to believers around the globe in times of persecution.

O God, the maker of heaven and earth, You have boldness to confess Jesus Christ as King and Savior and steadfastness to die for the faith to Your venerable servant, the holy and gentle Polycarp. Grant us grace to follow his example in sharing the cup of Christ's suffering so that we may also share in His glorious resurrection; through Jesus Christ, our Lord, who lives and reigns with You and the Holy Spirit, one God, now and forever. AMEN
Posted by Allan Eckert at 2:13 PM